Skip to content
PrevPrevious Blog
Next BlogNext
All Blog

Anna and I have just returned from Poland and are delighted to be able to share our story with you.  All 66 wonderful quilts have now been delivered to a child in the Children’s SOS Village of Krasnik, south of Warsaw in Poland.

We started out from the Alice Caroline studio with 5 huge (and really heavy) bags of quilts which had been vacuum packed in order to fit them into the bag sizes we had.  Getting the bags to the check in desk was quite a task.  Bristol airport now charges for trolleys and when you don’t have the correct change, it’s a matter of shuffling along bit by bit trying to inch closer to the check in.  After a relatively smooth flight we were unbelievably relieved to see the 5 large bags on the baggage belt at Modlin, Warsaw airport.  It’s such a  huge responsibility carrying such precious cargo. With hours and hours of expert sewing, these quilts were priceless and so we eagerly counted the bags as they appeared.  We rushed to our hotel room as it was getting late, being conscious of needing to have enough energy for the busy day ahead.

We were woken with a start at 6.30am by church bells clanging in our ears.  The drive in the dark hadn’t revealed how close we were to a church bell tower.  We did manage to catch a little more sleep before setting off on our long journey. The drive from Warsaw Modlin to Krasnik was estimated to be around 4 hours.  We wanted time to enjoy the scenery and take some photographs of the beautiful quilts, and so, left plenty of time.

The landscape was pretty flat with miles and miles of fruit tree orchards.  We saw lots of apples being harvested (even in the frost).

We stopped for a bowl of soup in a town called Bialobzegi.  We had a regional dish called Forszmak Lubelski (a meaty soup with pickled cucumbers) which was delicious and cheaper than the coffee!

We were keen to get back on the road after stopping in a beautiful wooded area to take some quilt photographs.  The Polish villages are full of colourful memorials which are often decorated with brightly coloured ribbons.  These commemorate various wars and uprisings but are also used to celebrate their faith.  We had become rather complacent with the quality of the motorways and this leg of the journey was much more difficult to navigate.  The roads were very bumpy, narrow and we had to be alert for drivers with the odd crazy driving manoeuvre.  We passed the time by loud singing to our two favourite sound tracks of the trip – Tori Amos and The Greatest Showman; car Karaoke yay!

We arrived at the village at dusk.  We were met with a very warm welcome by Wojciech (who had been coordinating with Anna in the run up to the visit) and Julita (the translator – phew!).  Julita spoke excellent English as well as German and teaches the kindergarten kids English at the village.  Wojciech helped us to carry the bags of quilts from the car into the common room – more about this below.  We met with the director of the village Dariusz.  He told us about life in the village and showed us some beautiful albums which documented the whole history of the village.  He also talked about the various fundraising events that are regularly organised to support the village.

The village has 14 houses, each with a ‘mother’ and an ‘aunt’.  We were set up in the common room with all of the 66 quilts and readied ourselves to meet the children.   It was thanks to Wojciech that this system ran so smoothly and that we got to meet each of the children as they chose their quilt.  He had organised it brilliantly.

We will never forget the look of nervous excitement on the faces of the children as they edged their way into the room. Once Wojciech had explained to them that they could choose their quilt from the enormous pile they got thoroughly stuck in.  Some found it overwhelming, picking one quilt up and then getting distracted by the beauty or patterns of another but most chose quickly, often seeing a pattern or colour they were drawn to.  Each child looked delighted with their quilt as they posed for a picture.

After we had met the children, we were invited to house number 10 where Gosia (Majgorzara) was the house ‘mother’ and Paulina was the ‘aunt’.  There were 6 children living in this house; a set of 2 brothers and another 4 siblings.  We were struck by Gosia’s immense enthusiasm for her children.  She loves them as her own and gets up at 4am every day to prepare food and get the house ready for the day ahead.  This means that she has enough time to spend with each child individually for whatever their needs might be on that day.  She was so warm and loving.  She has given much of her adult life to the village and children, having worked in the SOS Children’s village of Krasnik for 20 years.   She has been ‘mother’ to the children in the current house for 8 years.

The picture below is of Gosia (2nd from left) the house ‘mother’ and the house ‘aunt’ Paulina (far left) with two of the children of the house.  Anna and I are holding origami swans given to us as a present from Gosia which were made by the older boys. 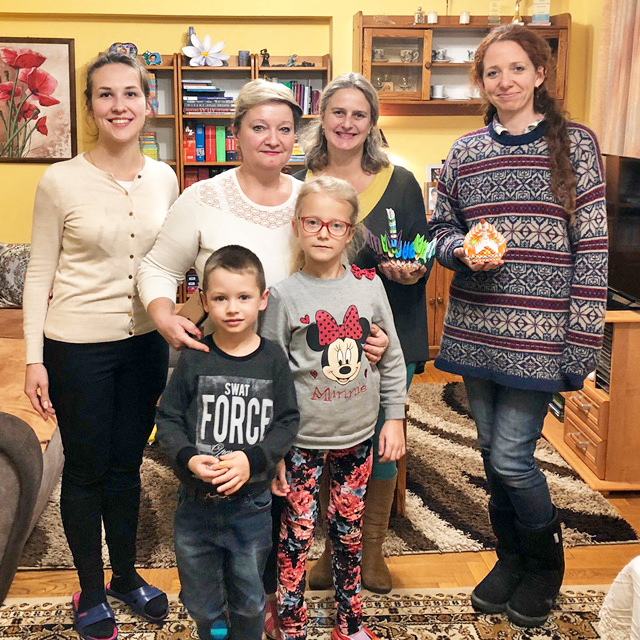 Gosia welcomed us into her home with wide and warm arms and showed us around.  The bedrooms were homely, had toys and were decorated with their special things.  The quilts that the children had just chosen were already spread on the beds with their bright colours standing out.

One of the older boys of the house, when choosing his quilt, went straight for a brightly coloured pinwheel quilt.  When we saw his room, we could see why.  He spent a lot of time doing origami in brightly coloured papers.  He had made origami flowers in the same colours. 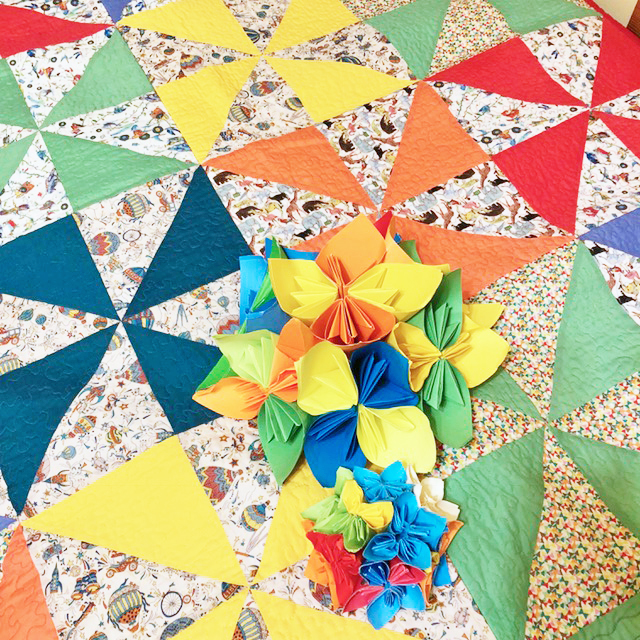 We were invited to eat in the family home where a Polish spread of cheeses, meats and breads had been lovingly prepared.  As we sat eating, Gosia talked and talked about her family, about how proud she is of her children and about the charity.  Her biggest hopes for the children are that they all have a good education and go on and get good jobs.  They all have lots of hobbies – football, jujitsu, and origami club.  Gosia believes in relationships being the most important thing and loves spending time with the children.

After our visit to Krasnik, we drove for another hour to the beautiful. historic city of Lublin.  We learnt a very real lesson here – don’t always trust google maps!  Tired after a long day, we were really looking forward to reaching our hotel.  Google maps took us to the outside of the hotel (it was surprisingly quite with no other cars).  We checked in and asked where we could park the car and we’re directed to a nearby car park.  As we got back into the car to drive to the car park a police car pulled up beside us.  We apologised and drove off – to only get blue lighted a few minutes later by the police car.  A combination of us not speaking any Polish and the police officer not speaking any English meant that we managed to gesture our apologies.  He looked rather exasperated and just said ‘go’.  We drove rather sheepishly to the car park and vowed to do more translating of Polish road signs in the future rather than to trust google maps entirely!

We enjoyed some well earned rest, more food and a glass of wine before we rose early the next day to travel home.

We had a very quick tourist look around Lublin which is really beautiful.  We stayed in the old town square with interestingly painted buildings.  The rest of the city is lovely.  It was a whistle stop tour as we had to leave by 9.30am to catch our flight home.  A further 4 hours of driving and enjoying the Polish countryside led us back to Modlin Warsaw airport.  It seemed like such a long time ago that we had arrived and such a lot had happened since we had.

We arrived home in the evening, exhausted but also feeling that the trip had been wonderful.  Each child in the village of Krasnik now had a beautiful Liberty quilt to snuggle.  We can not thank you enough for making this happen.  If it wasn’t for you – the wonderful quilters – this would not have been possible.  We will be running the project again in 2019 and will announce the launch in January. THANK YOU you for all of your commitment and dedication to the project!!!

If you would like to know more about the charity SOS Children’s Villages you can read more here.

A Spoonful of Sugar Designs

Tilly and the Buttons

Answers to most common queries are shown in our FAQs section. If you can’t find what you are looking for and would like to get in touch, please:

We aim to reply to all emails and voicemails within two business days.

See our reviews on